Spankings are fun, are they not? I’m glad I never told that to my parents, although they still wonder why I was such a bad girl growing up.

The fact that I stole my father’s car just to receive a lashing when he got home isn’t weird according to my therapist. But it’s all fun and games until someone gets hurt, isn’t it?

Not prepared for this kind of pressure and pleasure? 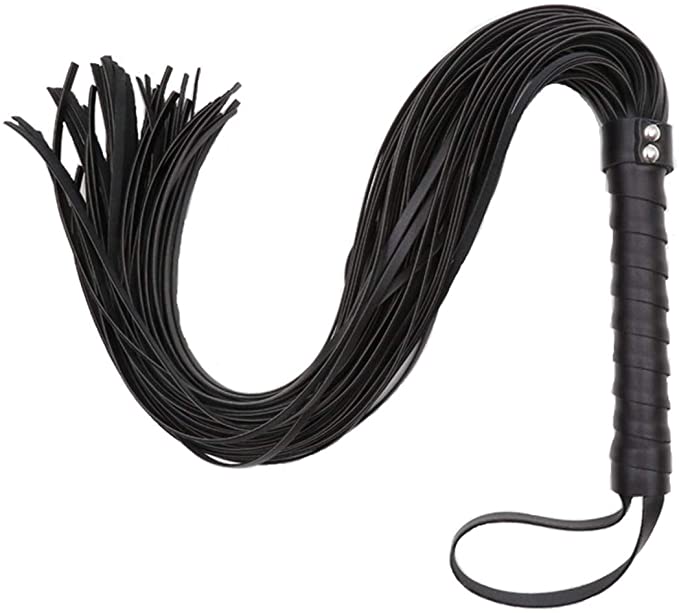 Once considered a weird kink, bondage games have become much more mainstream in the last few decades.

Whips are one of the most popular sex toys on the modern-day market, despite them being drastically low-tech by comparison.

In fact, the average sub/dom duet now has a large collection of punishment devices to choose from, sold everywhere from sex shops and drug stores to supermarkets and through online merchants.

Between whips, floggers, canes, staffs and paddles, people no longer have choose between something durable and something ideal.

Depending on your needs and desires, there’s likely a whip made just for you at this point.

Keep in mind, however, that a whip is not the same thing as a flogger, a cane, a staff or a paddle.

In general, whips feature a long, flexible cord-like form that whisks through the air as you fling it around.

Some are weighted and some are not, but all of them are designed to increase the sensations of pain and/or pleasure through direct contact with the skin. And because whippers usually enjoy the sights and sounds of the whipping process, many manufacturers have started using materials and incorporating features that create a unique flapping sound when in use.

So, whether you’re a voyeur, an auditory pervert or just a well-round dominant who knows how to give a decent beating, whips offer advantages that paddles, canes and staffs simply cannot.

Why would anyone want to engage in a sexual practice that involves pain through whipping?

Because that shit feels good, that’s why.

Also, gently and strategically whipping the body before, during and/or after orgasm can increase pleasure, heighten climax, enhance bonds between partners and make sex a lot more fun in the process.

Meanwhile, achieving all that often requires a high-end whip and here’s why:

Depending on what you’re doing and what you’re into, a high-quality whip can take the place of your bare hands and leave the same lasting impact as the latter.

Why use, abuse and bruise your palms when you don’t have to?

Did you know that experiencing a little pain right before you experience pleasure can actually heighten the good sensations and dull out your tolerance for discomfort?

And even if that weren’t true, there’s just something sexy about having your partner gently (or aggressively) flip a whip in your direction during foreplay and/or sex.

He/She who holds the whip makes the rules, isn’t that how it goes?

In the bedroom, the one with the whip is boss and the one being whipped is anything but cross.

Ain’t it funny how that works?

Sure, whips are sexy and sophisticated, but are they safe and satisfying?

The answer is yes.

As a matter of fact, luxury-grade whipping tools are often recommended by sex and relationship experts (like me) because of their high-end materials, excellent craftsmanship and versatile overall design.

Amazing or not, selecting the right whip can be tough.

Now, you’ll need some ammo to fight against all that clever advertising standing between you and a whip that’s actually worth it.

I try not to make a big fuss about the minor details of something. And by that I mean I obsess about them until it either drives me crazy or I figure out a way around it.

But regardless of the overall high-quality selection available, here are the top 4 most important things to look at or consider to determine whether that whip is worth it or not:

Size matters, amirite? The total length of that whip in your shopping cart will play a big role in how much use you get out of it.

Say the whip is too short; how much fun will you likely have when you can’t get a good swing?

Say the whip is too long; how much fun will you likely have when you can’t make decent contact with your partner’s body?

Those things are important things to consider, especially if you’re planning to use your the whip while the sub is restrained on large furniture such as beds or sex swings.

The shape of the whip you choose should be based on your intentions and the comfort level of your sub.

Furthermore, determine whether the overall shape is flexible of rigid. Some whips bend quite a bit and some use individual tendrils to create the same sensations without forcing the traditional shape on the user.

The only way to figure out which one is right for you is to discuss each session with your partner(s) before starting anything.

However, there’s always an exception to the rule. On top of that, you and/or your partner’s unique body chemistry could affect the types of materials you should seek for your sex toys.

In general, there are a handful of materials that are considered safe for all skin types.

Still, nobody wants to buy a sex toy that come apart after only a few uses. While most of today’s top options are made under strict manufacturing guidelines, that’s not to say there aren’t some duds among us.

Further, the materials of any whip can tell you a lot about its reliability, but that won’t answer all your questions.

And what are those facts, you ask? Well, they say “know thyself,” so it’s probably not something you should ignore. But shopping for a new sex toy is a very personal endeavor, so don’t let me tell you what to do.

Maybe I don’t know about this fetish, but I’m pretty sure nobody wants to wake up the morning after great sex to find a terrible rash all over their body.

Find out whether you and/or your partner has any sensitivities or allergies to certain materials.

Also, make sure the whip’s material is compatible with the lube you’re using or else things can get ugly in a hurry.

The whip’s durability, materials and craftsmanship work together to create a different sensation based on the toy’s design.

In other words, some sex whips generate a gentle sting while others pierce the nerves like a shock to the system.

Knowing what you and/or your partner can handle makes whip selection a lot simpler, plus it helps open up the conversation about unknown fantasies and deep-seated sexual desires – something you two sexual hermits could probably use a little more of before this whip is purchased.

Since we’re on the topic of sexual fantasies, does the whip you like have the capacity to perform under the kind of pressure you’re putting it?

I know how we all get excited about a unique or luxury-grade sex toy when we see it for the first time, but we have to start thinking critically about our selections so the manufacturers understand our likes and dislikes better.

With that said, make sure your fantasies and realities match up to avoid disappointment.

Can’t find what you’re looking for in a single device? Buy something that works well with others to enjoy a more well-rounded experience.

By the way, experience is everything when it comes to using a whip during sex.

Do you even know what you’re doing? Have you ever whipped anyone before?

Beginners should probably stick with the more gentle models and work their way up from there to avoid accident or injury.

Pros, feel free to experiment with more complex models but remember one thing: Your intentions and your partner’s intentions should always agree.

Never buy a sex whip that your sub doesn’t like simply because you want to feel like a cool kid. We all know about that one thing from that one time anyway, so it doesn’t really matter.

Nobody said you have to spend a bunch of money on a whip to get a good one.

However, larger options may force you to buy additional storage to keep things discreet. If you’re lucky, you’ll find one with its own container but that’s relatively rare for these types of products.

Either way, know your budget and make it flexible enough to account for pleasant surprises, shipping costs, taxes and accessories.

These days, good whips are more prevalent than bad ones and many of them are only a click away from being delivered right to your doorstep.

Because of that, it’s difficult for a manufacturer to churn out a poorly made one as long as they use the right materials and don’t burn the factory down. But because of that same reason, it’s also difficult for the majority of consumers to figure out “which whip is which.”

Here are my top three suggestions to get you started.

Made from 100% silicone and therefore obviously waterproof, there’s no end to the things that this dual-sided masterpiece can do.

Con: Things can get kind of messy considering the handle is also the part that gets shoved inside you/your partner’s body. Wash your hands, kids.

Ideal for beginners, pros and everyone in between, this user-friendly whip actually gets more pliable and easier to handle with every use. And speaking of handles, it has a circular knob on the end of its 1.5-inch integrated handle for an enhanced grip.

Meanwhile, the widest end of the Snakewhip measures .75 inches, with the narrowest part measuring just a few centimeters. Make it thud or make it sting, the choice is literally in your hands.

Pro: The unique handle can double as an on-contact stimulator for the skin and/or the outer erogenous zones.

Con: This product can leave welts if you’re not careful.

You can administer the kind of punishment your sub deserves with this luxurious riding crop from Coco de Mer.

It has a conveniently sturdy and beautifully braided handle for maximum control and it even features a wrist loop for safety. The folded leather tip generates that pleasing “slap” all doms know and love, and the whole thing is super flexible to create a spring-loaded effect for a more substantial sting.

Best of all, The Coco de Mer Brown Leather Riding Crop is rather unique because it comes with its down drawstring storage bag and a set of easy-to-follow care instructions from the manufacturer.

Con: The leather safety loop may not be big enough for people with larger hands.

Where To Find The Best Sex Whips On The Market?

LOVEHONEY – Our top recommended online sex toy shop that offers you the best prices, fastest and most discreet shipping on the internet.

Being whipped or whipping a partner creates a rush that’s unlike anything else you’ll ever experience.

Simply using your bare hands is such an outdated and rudimentary way of inflicting gentle pain on a lover. Upgrading your love life with a real-life whip is not only socially adept but also fiscally responsible and romantically inviting.

I don’t see how everyone doesn’t own at least one, unless it’s because of the massive number of options available.

Regardless of what the cool kids are doing, what matters most is that the whip you choose provides you and/or your partner with a safe and satisfying sexual experience (hopefully more than once).

If that takes a 48-inch Italian leather whip with a braided handle and swanky storage bag for good measure, then so be it. Sometimes, you just need to be hit on in a different way. #fightme