I’ve always wondered where the idea of paying for sex came from. With money and resources so difficult to come by throughout periods of our history, orgasms must have been prized more than nutrition, tradition, and family duties. And as much as I disagree with all of that, I’m certainly happy that the perverted prevailed to bring us an industry filled with incredible pleasure products.

At this point, we all have our favorite brands and ideas of what goes into their manufacturing, but that doesn’t mean we can’t still be surprised. In fact, I (of all people) was recently taken aback when introduced to one of society’s greatest examples of just how far we’ve come.

Hailed as the world’s most expensive sex toy, the LELO Inez caught my attention for more than just its shocking price tag. The sleek, sexy, and extremely attractive design are fun to look at, plus I heard that it had an incredible motor tucked inside.

I merely mentioned wanting one once and ended up receiving it as a gift from an ex partner who used expensive presents as a way to make up for the fact that he had a small dick and a pissy attitude. 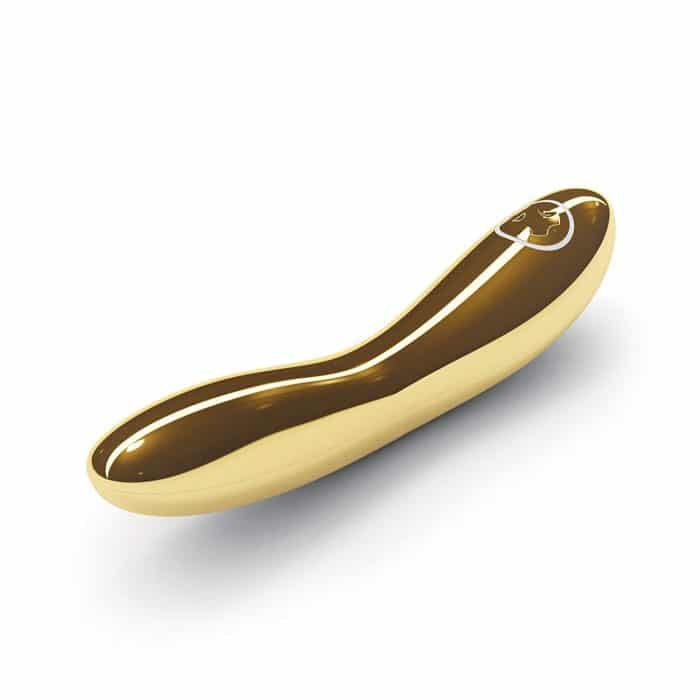 The difference, however, is found in the overall concept. Even at first glance, it’s obvious that the idea was convey decadence and luxury. The shaft itself is made out of supremely high-grade materials, but better than that it’s all covered in a shimmering coat of precious metal.

Best of all, it’s been fitted with a powerful vibrating motor that’s been openly raved about on countless public media forums and it offers a smart, ergonomic size and shape for optimal user-friendliness.

There’s a little button on the bottom of the 24-karat plated shaft and it lets you cycle through the five different pre-programmed modes at your leisure.

Beneath that plating is medical-grade stainless-steel, which means the toy also features the telltale temperature play options of other metal devices. The whole thing is slightly curved for precision stimulation whether used vaginally, anally or otherwise. 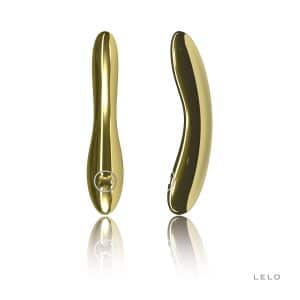 The integrated motor is perhaps the most impressive part though. While it doesn’t offer dozens of settings, it does provide a robust rumble that pulsates throughout the entire device (and can make your hand go numb if you’re not careful). Best of all, the battery has a surprisingly long lifespan when compared to the batteries of similar products.

The LELO brand is known for offering all-inclusive sex toys to the market, but that doesn’t mean all their products come with freebies. When you buy the Inez, for example, here’s what you’ll receive:

You’ll notice, like I did, that the manufacturer doesn’t include any water-based lube samples or any toy cleaning supplies either. Apparently, it’s automatically assumed that if you’re paying this much for a sex you probably have some lubrication laying around.

I’m sure that’s a safe bet, especially considering how sleek and simple the design of this bad boy is. It doesn’t take much to get it started and maintenance is a snap. So, I suppose if it came with a bunch of freebies then it might not have the same high-class appeal that it does now. Who knows?

My Experience With The LELO Inez

When forking over thousands of dollars for a sex toy, you want it to be as attractively packaged and well-equipped as possible. I’m no different, even if I wasn’t necessarily the one to spent my money on it.

I was almost afraid to touch it at first, lest I get my greasy fingerprints all over it. To make matters worse, the toy itself was hid inside a swanky presentation box that looked like something straight out a museum. I knew immediately I was out of my league.

My first round with the Inez consisted of me laying on my side in a dominant pose to begin with, but it ended with me laying prostrated across my bed like a submissive sex junkie needing one more fix. The initial experiences were pretty amazing, but after a while the device sort of lost its appeal because of the rather limited settings choices and its inability to sync with other devices or be used with a harness.

For that much money, I assumed it would be insanely high-tech, compatible, and/or at least feature 10+ vibe modes to explore, but maybe I’m being naïve. Either way, it has never failed to capture the immediate attention of my partners and make me look like a sexual superstar, nor has it ever malfunctioned, broken or needed me to cash in on the manufacturer’s warranty.

As we all know, there is no such thing as a perfect pleasure product. Today’s manufacturer will market their device as though it’s the best thing since sliced bread, but we’re not dumb.

The average consumer understands that most things have a few pros and cons of their own, and the LELO Inez is no exception. Here are the things I think you need to consider before settling on this bad boy:

Being picky about the things you stick inside your body is totally understandable. What’s not understandable is settling for the first device you come across simply because it’s packaged nicely or priced according to your expectations.